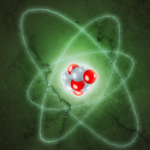 To recap, we know that everything you can see and touch, literally every physical object around you can be made from only three particles, called subatomic particles: protons, neutrons and electrons.

Here’s an example of what I mean.

Let’s assume you are standing on a standard bathroom scale. Since, you are a physical object and the earth’s gravity is pulling you down onto the scale, then you are exerting a force unto that scale. The number you see in front of you, your weight, is a measure of the amount of force which you are exerting on the scale due to the influence of gravity on your body.

So what happens when you gently bounce up and down? The scale starts to jump all over the place. If you bounce up for a moment, the scale will show a lower weight, and when you come back down, you exert a greater force on the scale from your downward motion pushing down onto the scale, which causes the scale read a larger weight. But has the actual amount of matter of which you are composed actually changed? No not at all!

This brings us to mass. The mass is a measure of the total quantity of matter – the total quantity of physical stuff within the thing you are trying to measure. So what gives matter its mass? The answer is protons and neutrons! Remember, every physical and tangible object (this is matter) in our universe is composed of only three subatomic particles – protons, neutrons and electrons. And at some level, these three particles are responsible for every property of matter.

But recognize that I said the mass is the due to the protons and neutrons, and I did not include the electrons. That is because the mass of an electron – much like its size (which we learned about in the last lesson) – is incredibly small compared to that of protons and neutrons. So small in fact, that we tend to disregard it completely. In the next lesson, we will talk more about the actual mass of each of these three subatomic particles in greater detail.